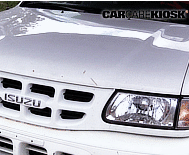 Isuzu Motors is a Japanese Company that primarily focuses on larger commercial vehicles such as trucks and buses. The Company was founded in the early 1900s and launched its automobile division in 1937 but did not begin selling consumer vehicles in the U.S. until the 1980s. Isuzu has a penchant for partnering with other car companies such as Subaru, Mitsubishi, Nissan, General Motors and Honda to fill gaps in its product lineup.

The Company introduced the Isuzu VehiCROSS in 1999, which was unlike anything else on the market. The VehiCROSS predated the explosive popularity of smaller and more-stylish crossovers by a decade. Ironically, Isuzu was unable to capitalize on this trend and ceased U.S. imports in early 2009.

“Thanks now I know where to find the dip stick and know why I couldn't see it easily. ”

“Easy peasy - thanks for the video. ”

“Thank you. I now know the size of the bracket so I can take it off. ”