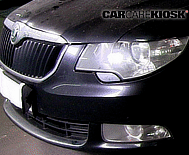 Škoda is a Czech car Company that started with bicycles in the late 1800s and added motors and wheels to become a car company by the 1920s. A government nationalization and a couple of World Wars later, Škoda was sold to Volkswagen in the early 1990s.

Prior to VW ownership, Škodas compared well against Eastern-Bloc competitors such as Lada and Yugo. However, Škodas had a reputation for old designs and unreliability in contrast to many of the more expensive Western European marques. After full integration with Volkswagen, Škodas have sold very well due to their VW platform sharing and strong value proposition.

The Škoda Octavia saloon and estate continues to be a perennial best-seller for the brand. Other popular Škodas include the Škoda Fabia, Rapid, Superb and Yeti.

“thank you that was a great video very helpful. ”

“Thank you. My daughter has a flat tire and is 2 hours away. I was able to tell her where the jack kit was hidden and how to lower the tire from its location under the car. I would have needed this if I was changing the tire! This video is invaluable. ”

“This page has answered my questions. that will save me time and money and I will continue to use it before I get a repair done on my vans. ”

“awsome... big help but way to much to change a daytime runnng light. ”